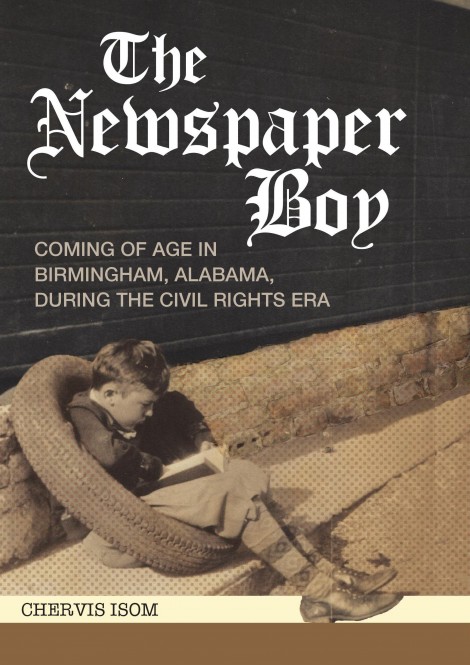 —      An important story . . . (about) the heart and mind of one conscientious newspaper boy . . . how social and individual change can and does occur . . . how casual, quiet, rational conversation counts enormously . . .how reading and working can open the world for us. — Novelist Sena Jeter Naslund

The Newspaper Boy is a remarkable collection of memories and personal reflections of the deep emotional conflicts a young newspaper delivery boy, Chervis Isom, encountered while growing up in Birmingham, Alabama, in a time of racial strife and discord in the 1950s and early ’60s. A quiet and shy boy, the young Isom was a reader, and it would be the written word he would turn to as he tried to make sense of his world.

Many of Isom’s stories are tied to the “Southern Way of Life,” a culture in which he grew up that assumed an inflexible white superiority represented by Jim Crow laws, laws that his father, a Greyhound Bus driver, was obligated to enforce in the face of a rising reaction by his African American riders that he neither understood nor tolerated. Isom’s early adolescent views, shaped by his father’s frustrations, are thrown into stark contrast as he is drawn to the positive influence of Helen and Vern Miller, a young couple from the Far North who moved onto his paper route, bringing with them alien ideas completely out of step with his own culture and teachings. Even though the Millers’ views would clash with his own, they quickly became his favorite customers. Each Saturday they opened their door to him at collection time, inviting him in to politely discuss and debate the day’s issues.

Through the Millers’ progressive approach to the growing racial unrest in Birmingham in the mid-to late-1950s, the young Isom gradually learned, in a series of fits and starts, advances and setbacks, to question the prevailing cultural attitudes and biases towards the African American community. In the end, he would come to understand the simple truth, as expressed by Rev. Martin Luther King, Jr., that people must be judged not “by the color of their skin, but by the content of their character.”

Isom’s narrative tells the story of good, church-going Southern people bound up in the Jim Crow culture of their time, completely ignorant of the African American experience. It tells of the value of hard work and education and the importance of the written word to change us for the better. His story is replete with his gratitude to the Millers, who took the time and effort to lead him to a better place, to Abe Berkowitz, who saw in Isom something he had not seen in himself and the man who would one day become his law partner, and finally to his father, as he belatedly came to recognize the importance of his father’s role in making him into the man he turned out to be.

This book shows how a single person (or a couple in the case of the Millers) might, in a quiet and unobtrusive manner, set a young person’s life on a higher arc; how it falls to each of us to use our own talents to lead young people to embrace the “better angels of our nature.”

Isom’s story is set in Birmingham, in an urban neighborhood known as Norwood, and stresses the vital role that “community” plays in our human development, and our need to continually rebuild and revitalize our communities.

And finally, while this is the story of a young man coming of age in a difficult time and place, the author is now seventy-four years of age. His story has been written from the perspective of a man who now appreciates the journey that brought him to this time and place, and who eagerly anticipates the life that yet lies before him and the mission he has carved out for his own future.